As this family of six grew, various remodeling projects were undertaken. A media room and office area, a work out area, and a full bath were added to the basement. Remodeling of the master bath and kids bathroom, a laundry and mudroom with cubbies and kids storage and the lynch pin that said they were there to stay, an in-ground pool. For the most part, their house kept pace with them and their needs. But these needs were once again changing and moving was not on their radar.

The house had four adequately sized bedrooms with the two oldest and closest in age girls sharing a room with bunk beds. That worked out fine for little girls but the girls are going to be teens pretty soon and that arrangement wasn’t going to work much longer. With less kid time demands and a little more me time, mom started an at home business with a girl friend making and selling one of a kind beaded jewelry. Her manufacturing facility was the dining room table with all of the leaves in it and a stack of Rubbermaid storage containers. The house too now has five computers and dad wanted a billiard table but there is no room in the basement to put one.

The original scope of this project was to construct an addition with a second floor bedroom space large enough to let the girls still share a room, but with their own spaces within it. It was to have a big girl’s walk in closet with their own separate dressing areas, and re-purposing the old bedroom to an anteroom and computer/study area. On the first floor of the addition, a sunroom with heated tile floor and an adjoining studio space for mom and her business was to be added. The play room off of the front foyer which was becoming a very expensive storage room was to be re-purposed to become the billiard room. It was decided for several reasons to put a full basement under the addition. The first reason was a practical mechanical consideration. The single furnace for the whole house was at the complete opposite end of the structure and it was already a challenge heating and cooling the far second floor bedrooms. The second reason was to be able to have the space to move all the items being stored in the play room into the new basement to make room for the billiard room. And, the final reason was dad’s passion for the latest and best audio and video technology created a need for space the size of a small television station for all of his A/V components that are intergraded throughout the house with keypad and structured wiring in each room. The additional furnace and air conditioning system in the new basement was also zoned for the first and second floor and additional ducting was routed into the other bedrooms to take the burden off of the original furnace and air.

The new bedroom has liberal space for each girl to maintain their own identities while still being together and room enough for a common area between them. The new study area has custom Maple cabinetry and computer areas for each girl with under cabinet task lighting. The wall that separated the original bedroom from the second floor hallway was completely opened up to the hallway making the space feel larger and allowing for easy parental observations of responsible study and computer habits.

On the first floor for the studio space, our client had a clear vision for what she wanted and needed to work and collaborate with her partner effectively. The space is separated from the new sunroom with French pocket doors for privacy and when open gives a clear view to the happenings in the house. Her space features a cork floor, two custom Maple desk/work areas with jeweled inlayed cabinet pulls, a storage and credenza area for supplies, and a wine fridge for storing inspiration.

The sunroom has porcelain tile with in-floor electric heat and PELLA windows with internal slim shades and built in surround sound audio. 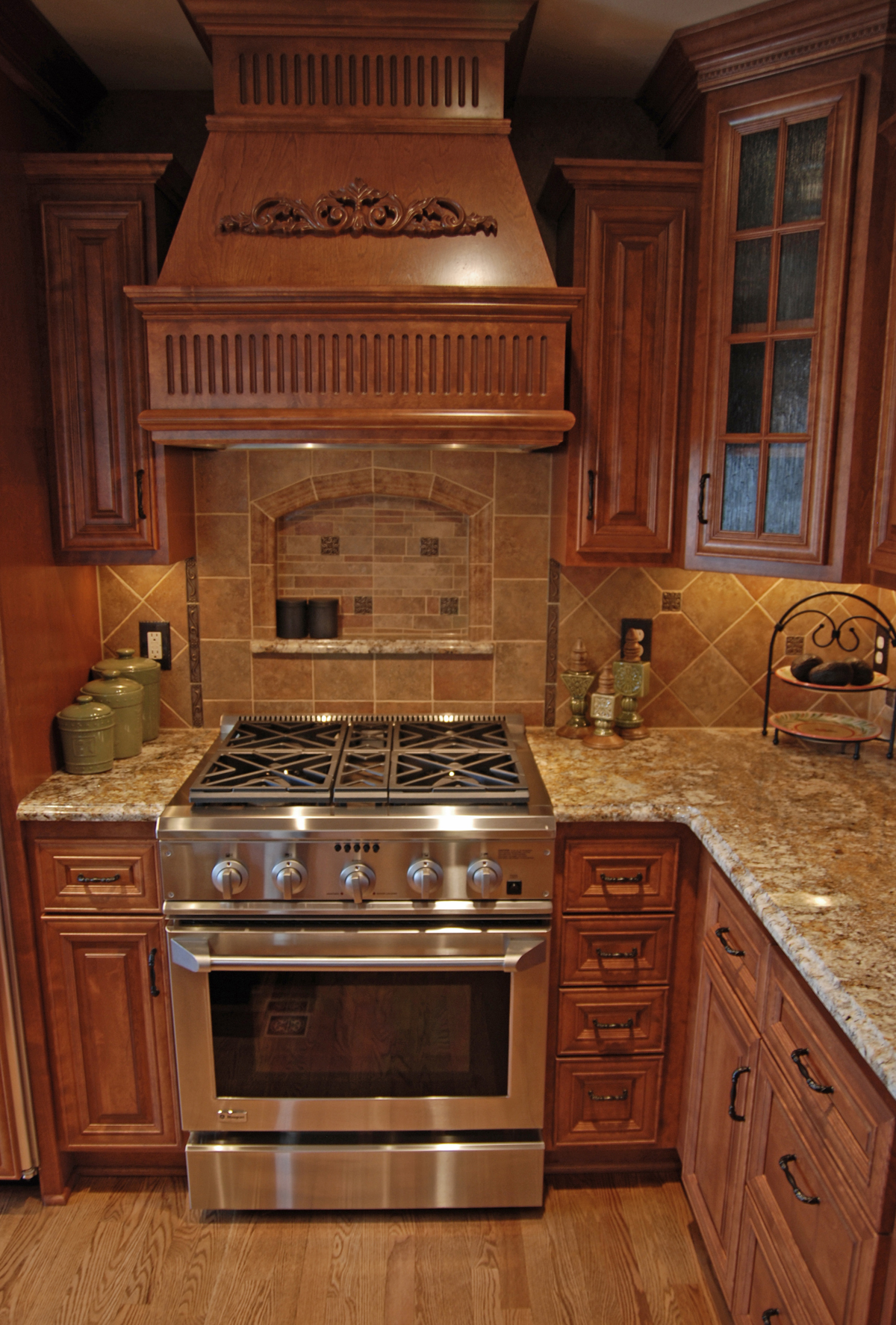 Along the way, a decision was made to add the kitchen into the mix of the project. The thoughts behind that consisted of; with the in ground pool, the billiard room, sunroom, family room, and studio all on the first floor this house attracted a lot of guests and even with these additional new spaces the kitchen would remain the area that everyone would hang out in. Furthermore, with the kids getting older and more independent, they were doing more for themselves in the kitchen as well as choosing to help more. It also needed to be updated as it was original and the Owner did not want it to weigh down all of their other improvements by not fitting in.

Custom Maple cabinetry with granite counters, oil rubbed bronze hardware and faucetry, custom millwork appointments, and tile backsplashes make this a stand out. The intent was to remove all of the soffits within the space to allow for the staggering of the cabinets heights to create dimension in the space. Upon investigation though it was discovered that all of the supply and waste lines for the second floor bathrooms were running through the soffit along the exterior wall and it proved impractical to move all of that so the soffit stayed. The other soffits were removed as intended. Not wanting the space just to look like it was simply updated with new cabinets and tops we were challenged to do something to create the effect of completely new space.

The enlarged island was designed in a semi-circle fashion, below the island a custom wood inlay was routed into the existing Oak floor following its shape, and above a dropped soffit with crown moulding and special lighting was added to create a central focal point in the room and to provide balance to the remaining exterior wall soffit. The existing Oak hardwood floors in the kitchen and leading into the front foyer were sanded and refinished a bit lighter than before to punctuate the new cabinetry finish and wood inlay making the entire space feel new.

As the projects were drawing to a close in their final month of construction, it was brought up to us that our client always disliked the stairs leading from the foyer to the second floor, feeling as if the looked cheap. We were asked for input and suggestions on how we could create a more elegant feeling and tie in the use of dark metals and wood in the mix. The existing housed staircase was torn out and a new open stringer Red Oak staircase with a rounded starter step, black iron balusters, a volute rail, and new second floor landing rails was installed in its place.